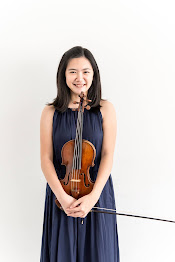 Singaporean violinist Kimberlyn Wu is an active performer both locally and abroad.

A graduate of the Peabody Institute in the United States, she completed her Masters of Music in Violin Performance with Taiwanese violinist Tseng Keng-Yuen. A recipient of the Peabody- YSTCM Masters of Music Scholarship, she has also completed her Bachelor studies with Ng Yu-Ying at the Yong Siew Toh Conservatory of Music, and spent most of her formative years before with Chua Lik Wuk. She also plays the baroque violin and performed regularly with the Baltimore Baroque Band.

A big believer that music-making is best enjoyed and most inspired when performing with others, her vast experience with orchestra and chamber music has taken her across Asia, Europe and United States. Her joy of performing with others goes back to the days of her youth where she spend most of her time with the Singapore National Youth Orchestra and Nanyang Girls String Ensemble, of which the latter has also seen her perform as assistant Concertmaster in Carnegie Hall, New York. She has also been part of state premieres in the United States, including the recent chamber opera production of “As One” by Laura Kaminsky. Her orchestral experience locally also includes concerts with the Metropolitan Festival Orchestra, Orchestra of the Music Makers, Singapore Lyric Opera, and Re:Sound Collective. She was also part of the Asia Virtuosi, an annual festival orchestra comprising of leading orchestral musicians from orchestras all around Asia. She has often taken up principal positions, and has recently served as concertmaster in the triple-bill production of Puccini’s Il Trittico with the Peabody Opera Theatre Orchestra. Kimberlyn has also had the privilege to perform for the Takacs Quartet, Armida Quartett, David Takeno, Seth Knopp, Michael Kannen, amongst others.

Kimberlyn also finds her vocation as an educator extremely purposeful. In particular, she enjoys working with pre-schoolers and teenagers. She values a student’s learning process and enjoys building relationships with students through what she can offer as a violin/music educator. She finds it most encouraging for herself when she sees students enjoying making music together. Besides providing instrumental instruction, she has also given educational workshops for students at pre-school to pre-college levels. She hopes to raise awareness of the importance of ensemble playing in one’s holistic music education.